Introduction of ‘The Gospel Of the Sikh Gurus’ - Book By Dr. G.S Chauhan

This little book is a wonderful storehouse of wisdom for spiritual seekers. It was written three centuries ago by Bhai Mani Singh a great saint soldier-martyr who was confidant of Guru Gobind Singh the tenth Master.

Human beings aim at attaining four targets in their lives i.e. Dharma, Artha, Kama and Moksha (moral responsibilities, wealth, worldly desires and liberation). This book answers varied questions on these subjects which are as valid to-day as were three to five centuries ago.

For spiritual advancement, there paths like Knowledge, Service, Devotion and Hath Yoga etc. This book gives finer details, subtleties, complexties and benefits of each discipline in simple, lucid and practical manner.

Every religion has two components. One is the spiritual advancement of the disciples, the instructions for which are given by its founder and are eternal in nature and the second is the rituals and the way of life. The second part gets modified with time depending upon political and social circumstances. With passage of time, the understanding and practice of spiritual principles becomes secondary and ritual worship with outward signs of religion gains importance. Sikhism or the path of Guru Nanak Dev is no exception. To maintain correct balance between the two components of a religion, enlightened souls like Bhai Mani Singh, Bhai Vir Singh, Bhai Ditt Singh Gyani and other founders of 'Singh Sabha' movement have from time to time presented the devotees with ideas to enable them to correctly understand the teachings of the Gurus and emulate them. The book "Sikhan di Bhagat Mala" or the garland of the Sikh saints by Bhai Mani Singh Shahid is an attempt in this direction. In this book, stories of the disciples of Guru Nanak Dev to Guru Har Gobind are given.

Bhai Gurdas, in his 11th ballad has described the characteristics of a perfect disciple in the first twelve stanzas. Further 13th to 31st stanzas are only a catalogue of names and the places they came from. During the times of Bhai Gurdas, these names and their lives were fresh in the minds of the disciples. By the time of Guru Gobind Singh, these memories got faded. So the devotees requested Guru Gobind Singh to describe the achievements of these great disciples. Guru ji described their stories, which were written down by Bhai Mani Singh in the form of a book.

Most of the disciples who came to Guru ji were desirous of liberation so as to end their cycle of birth and death. They were from diverse backgrounds like coolies, carpenters, businessmen, government officials, soldiers, farmers, teachers and learned persons etc. Depending upon their karmic and mental level. Guru ji prescribed the type of physical service, meditation, charities or kirtan and discourses etc. for them.

As explained in the story of Bhai Banwali and Parasram (para 7.8) Guru Granth Sahib has instructions for all types and levels of devotees. Just as a medical practioner though has medicines for all diseases but before prescribing any one of them, he checks up the patient to diagnose the cause of the malady. Similarly a Guru oriented disciple will examine a seeker of Truth and advice him the correct course of spiritual discipline. This fact becomes amply clear on reading this book and everybody may find advice to their state of evolution.

The teachings of the Sikh Gurus are about the Eternal Lord. These are therefore beyond time, space, country, race, caste or creed. These are as relevant today as they were five centuries ago, during the times of Guru Nanak Dev.

When I came across this book, I thought that this gem of spiritual instructions by the Sikh Gurus should be accessible to all seekers of Truth from the Sikh as well as other religions. Since the reach of Gurmukhi script was limited, its translation in English was inescapable, so that it could be circulated all over India and foreign countries. Hence I have undertaken the task of translation.

The subjects dealt with in this book are as varied as the number of stories. It has innermost secrets of meditation, Vedanta, karam Yoga, bhakti Yoga, Gyan Yoga, renunciation, control of senses, mind, charity, achieving of single minded concentration, austerities etc. A number of stories help correct understanding of certain historical facts.

My thanks are due to Miss Puneet Kaur who set the book on computer with great devotion. May the Lord bless her.

I am sure this humble effort will help innumerable readers to learn what Bhai Mani Singh had heard from Guru Gobind Singh.

About the Author ‘Dr. G. S. Chauhan' of the Book ‘The Gospel Of the Sikh Gurus’

Born in 1933, Dr. G. S. Chauhan is an Electrical Engineer and had served Indian Railways for 34 years before retirement in 1991 as a General Manager. After retirement, he has fully devoted his time to the spiritual studies. Apart from classics like Bhagwad Gita, Bhagwad Puran, Upanishads, Adi Shankracharya's Vivekchudamani, Patanjali's Yog Sutras etc., he has obtained deep insight into the teachings of contemporary saints like Parmahansa Ramakrishna, Shri Vivekananda, Parmahansa Yogananda, Maharishi Ramana of Tiruvanamalai (Tamil Nadu), Swami Ram Das of Anandashram (Kanhagad, Kerala) and Swami Chinmayananda, etc.

Thus, the study of India's great spiritual heritage had enabled him to see the teachings of Sikh Gurus in a unique perspective. According to him the teachings of Sri Guru Nanak Dev and his successors cannot be confined to a community, country or time. These are of universal, ageless and timeless nature. Thus, they are most appropriate for the present tension ridden times.

The unique feature of Dr. Chauhan's interpretation of Gurbani is the thread of continuity he has established in both Japji and Sukhmani Sahib. According to him, both these priceless compositions form a complete course of instructions for evolving a layman into a fully self-realized Jiwan Mukta.

Having travelled extensively, he well understands the spiritual needs of expatriate devotees as well those living in non-Punjabi speaking states within India. The tri-lingual format adopted by him for translation of "Japji Sahib" (Hemkunt Press) is ideal for understanding the original Gurbani by readers of varied backgrounds. His English translation of "Sukhmani Sahib" is under print by Pingalwara Amritsar. He has also translated "Bhagat Bam" with lives of saints into English which is also under print by (Hemkunt Press). His books are therefore ideal gift items for presentation to friends to introduce them to the. spiritual philosophy of Sikh Gurus.

Table of the Contents For 'The Gospel Of the Sikh Gurus' - Book By Dr. G.S Chauhan 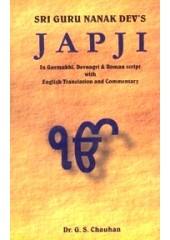 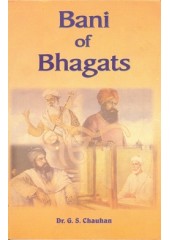