Sikh studies have made considerable progress in recent years; new facts have been brought to light and new interpretations have been offered from different points of view. I have tried in this volume to bring to the reader's notice the salient features of the lives and teachings of the ten Gurus. My principal object has been to trace the development of the Sikh society from its humble origin in the days of the Founder of the faith to its full maturity under the Tenth Guru. Sociological and political factors which contributed directly and indirectly to its steady progress in the sixteenth and seventeenth centuries have been given due prominence; but the crucial role played by religious devotion and zeal has never been overlooked. There is continuous stress on the background, for, as a distinguished British historian says, 'against an imaginary background even correctly stated facts can be wonderfully transformed'. Such transformation is a disquieting feature of some recent studies relating to Indian history.

I take this opportunity to offer my grateful homage to the memory of my teacher, the late Professor Indubhushan Banerjee, a well-remem­bered pioneer in the field of Sikh studies, from whom I took my first lessons in the subject.

To my pupils and friends, Dr. Ajit Neogy of Visva-Bharati Univer­sity, Dr. Mihir Kumar Roy of Burdwan University, Shri Ajay Banerjee of Presidency College, Calcutta, and Dr. Himadri Banerjee of Rabindra Bharati University I am indebted for many acts of kindness. My daughters, Dr. Dipasri Banerjee, Lecturer in History, Maharani Kasiswari College, Calcutta, and Dr. Sarmila Banerjee, Lecturer in History, Victoria Institution (College), Calcutta, looked after me with maternal care and made it possible for me to pass through the heavy strain of reading and writing. To all of them I convey my best wishes. 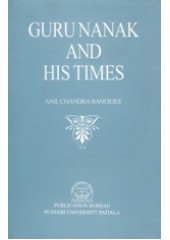 Guru Nanak and His Times - Book By Anil Chandra Bannerji

Preface Of The Book 'Guru Nanak and His Times' By Anil Chandra Bannerji This book is an expanded ..