A Prayer is a personal communication addressed to a deity in the form of supplication, adoration, praise, contrition or thanks ­giving. But in Sikhism all other deities except God have been rejected. All other gods, goddesses, angels and the spirits are prone to death. Why should one serve or remember him, who takes birth and then dies down (Var Gujri M-3, p. 509). Even Brahmas, Vishnus and Shivas pass away after the lapse of their fixed period of life. ( 10 Swayyas Dasam Granth). Only one Lord will be there in all the ages. Who has not died and who will not die? (Maru M-1, p. 1022). Death is a certainty and the souls because of their actions undergo transmigration, the human being wears the garments of hath pleasure and pain, happiness and sorrow, (Var Majh M-1, p. 149), which he receives from the Lord, according to his worth. But the suffering mostly pervades in our lives. The so-called pleasures of the world also bring pain. As many are the pleasures of the body, so many are the sufferings (Var Malar M. 1, p. 1287). The sensuous pleasures result in sufferings and maladies (Basant M-1, p. 1189). Guru Nanak Dev has said, 'There is suffering in birth and suffering in death and suffering in all the dealings of the world" (Var Sarang M-4, Shalok M-1, p. 1240). "There is suffering in separation, there is suffering in hunger; there is suffering of the mighty Yama. There is also suffering caused by physical ailment" (Malar M-1, p. 1256). Guru Nanak Dev has also conclusively said, "Though the livas move towards their destruction by the fire of suffering, still the suffering itself is the remedy (Var Sarang M-4, Shalok M-1, p. 1240). And this peace-giving remedy is the Prayer, gushing out from the core of the heart.

The formal prayer is like a ritual. Everyday the prayer is offered in Sikh temples in the morning as well as in the evening. The real prayer is neither ritualistic nor it can he captured in the vesture of language, by the human beings without devotion, faith and love. The prayer creates a bridge between the soul and the Lord. It wells up in the mind of the man of God. The prayers are offered not only by the men of God but also by the men of the world. The men of the world may express worldly demands in their formal prayers. They may also pray from their hearts if they need something for themselves very badly. They may also request for a grave danger to be averted from someone whom they love. The men of God may express worldly requirements which can help in their spiritual quest. They may also pray for strength to be granted to them for the welfare and service of humanity, in which they visualise the All-Pervasive Lord. Even the formal prayer of the Sikhs ends with the following words :

"Nanak Nam Chardi Kala, Tere Bhane Sarbat Da Bhala." (The Name of the Lord emanating from the Guru (Guru Nanak) may bring high spirits and the welfare of all in his will).

1. Japu a longer bani of Guru Nanak Dev-in the morning.

2. So-Daru or Rahras consisting of nine hymns of the Gurus and a few additional hymns of the third, fifth and tenth Gurus alongwith the Ardaas (traditional prayer)-in the evening.

3. Sohila or Aarti or Kirtan Sohila consisting of five hymns of the Gurus-at bed time.

Bhai Gurdas, the Sikh theologian has made a mention of these prayers in the first Var. Besides the above daily observances, a Sikh offers his prayers based on the hymns of the scripture at any time convenient to him. At the beginning of his prayer he says, 111 pray with folded hands; If Thou likest, Thou may set it right. With Thy Grace, engage me in Thy devotion; This person Nanak may always remember the Lord." ( Suhi M-5, pp.736-37). The prayer can be offered before the Lord with utmost humility (Var Asa M-1, p. 474). The Sikh says, "Am I worthy of offering Prayer-my sins and virtues are both evident before Thee" (Asa M-1, p. 30). "The Prayer of the man of God does not go in vain." (Bilawal M-5, p. 819). He begins his prayer like this : 111 pray before Thee" the soul and body are Thine. Nanak says

Table of Contents For 'Sikh Prayers' By Surindar Singh Kohli 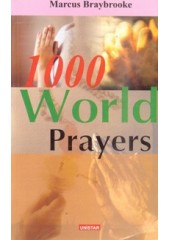 Summary of '1000 World Prayers' By Marcus Braybrooke  A rich inheritance of prayers from the..