The book Sikh Religion: Democratic Ideals and Institutions attempts a subject which has not so far been dealt with in a seriously academic fashion. Some aspects of it may have been covered in some stray articles, but the present one is the first sustained study of a theme which would strike to any student of Sikh religion and history as obviously significant. The inspiration to cover this unchartered ground came from my revered teacher, Dr. Hari Ram Gupta, an eminent historian.

The Sikh Gurus expounded a religion based primarily on democratic concepts and institutions. The essence of the teachings of the Gurus was the unity of God and the brotherhood of man. We find in them an unbroken thread of the ideals of selfless service, love for mankind, humility, equality, faternity and honest endeavour. The quality of men is their sheet-anchor. To give a practical shape to these institutions continued gradually until Guru Hargobind brought about a transformation by giving a militant turn to the movement. The most dramatic development was Guru Gobind Singh's creation of the Khalsa brotherhood through a novel system of baptism. Another feature of this transformation was the bridging of the gulf between the Guru and the disciple. What impressed the masses was not only the Guru's complete identification with the common man but also his condescending to kneel down before his disciples to receive baptism from them--a unique and unheard of incident in the history of mankind.

The first chapter of this book is an introduction to the subject. In it, the idea of the growth and development of democracy has been traced briefly. A brief survey of the conditions prevailing in the Indian society during the Middle Ages, with special references to the Punjab has been made. A clear picture of the society which existed at the time of the origin of the Sikh religion emerges from it.

The third chapter treats of the institution of Sangat in its historical perspective and how the Sikh Gurus added new dimensions to it with a view to levelling down the social barriers and initiating their followers into a corporate living.

The fourth chapter discusses the institutions of Pangat (langar). Its background with special reference to the Indian society has been traced. The Sikh Gurus laid special emphasis on this institution for the propagation c the ideals of love and service of fellow-beings, humility, earning one's livelihood with honest means and sharing the fruits of one's labour with others. The disciples were thus Schooled in community-living which instilled democratic ideals and institutions into their minds.

The Gurus' enunciation of equality of man and woman is given in the fifth chapter. The position of Indian women in society has been traced from the earliest times to the period of the Gurus. The views of the Gurus regarding the rights and the status of woman have been quoted. The denunciation of the ills like Purdah, Sati and infanticide has been emphasized.

The sixth chapter deals with the unique contribution of Adi Granth in spreading the message of universal love, peace and brotherhood of the Sikh Gurus and the Bhaktas for all mankind. The need for compiling the holy Granth by Guru Arjan, its contents and various contributors has been discussed in details and its importance have been highlighted.

The seventh chapter highlights the Khalsa brotherhood. The creation of the Khalsa by Guru Gobind Singh, its deep ideological impact, its tremendous after-effects, its epoch making consequences have been discussed in detail. Special attention has been focussed on the new method of baptism with Khanda (the double-edged sword), the complete identification of the Guru with the Five Beloved Ones and the mighty social and spiritual objective that he achieved through this novel method of baptism and the common code of conduct laid down for all the members of the Khalsa brotherhood.

So far as the philosophical aspect of this book is concerned, the prime sources of information are the Guru Granth, the Dasam Granth and the Vars of Bhai Gurdas. I have drawn on them liberally in substantiating my views. For the historical aspect of this book, I have chiefly depended on manuscripts, classified documents, and modern works published in English, Persian, Urdu and Punjabi relevant to the theme of this book.

I owe my deep debt of gratitude to Dr. Ganda Singh, the distinguished historian who has been an unfailing source of inspiration and guidance to me . I gratefully acknowledge the valuable suggestions given by Dr. Bhai Jodh Singh, Sardar Kirpal Singh Narang, Dr. Fauja Singh, Professor Harbans Singh, Dr. Taran Singh and Dr. Sethi, in the completion of this work.

About The Author Of Book  'Sikh Religion - Democratic Ideals and Institutions'

Sudarshan Singh (DOB 13-05-1931) did M.A., Ph.D. and taught History in various Government Colleges/Universities of the state for more than 24 years. He retired  as Professor/Director of I.A.S. Training Centre, Punjabi University, Patiala. He has devoted himself to the systematic study of the philosophy of life and history of various religious systems, especially the Sikh religion. Besides more than dozen research papers published in reputed journals, he has some scholarly works to his credit including Life-Style of the People of Punjab and Punjab da itihas (1849-1947). 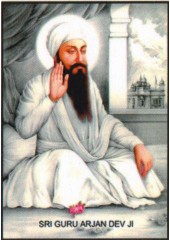