Maharaja Ranjit Singh was a strong supporter of new ideas and trends. He was, therefore, quick to respond to the exigencies of political situation prevailing in the Panjab during the early 19th century. He created a strong and disciplined army and well coordinated administration. He, in persuit of his objectives, inducted into his service a large number of Europeans whose talent was employed in modernizing civil and military administration of the Kingdom of Lahore. Among the Europeans there were a good number of the French. The French officers, both civil and military, contributed significantly towards the modernization of the army of the Maharaja Ranjit Singh.

I am glad that Jean-Marie Lafont has underscored the contribution of French officers, particularly General Allard and Colonel Mouton. This book, I believe is a landmark in tracing the historic relationship between India and France. I congratulate Dr. Lafont for preparing this book for Guru Nanak Dev University.

researchers of the history of Punjab.

In 1972, when I was deputed by the French Government to teach French at the Punjab. University, Lahore, Pakistan, I was well advanced in the writing of a Ph.D. thesis in Greek archaeology. I was planning to resume in Lahore my former research on the Indo-Greeks, a topic I was interested in since my teens and which I had an exceptional opportunity to study while participating in the Franc'o-Afghan excavations at Ai Khanum (Afghanistan) in the winter of 1967.

In Lahore I was asked whether I knew of a former officer of Napoleon, who had trained the army of Maharaja Ranjit Singh and who had married a Hindu princess. He had died in Peshawar and was supposed to lie buried in Lahore. His wife died in France, somewhere on the Cote d'Azur. I was myself going to marry Rehana, my young "princess" of Lahore, and it took us one year to re-discover the tomb of General Allard in Anarkali. The next summer, both of us were climbing up the small rocky "Chemin des Amoureux" at Saint-Tropez, anxious to meet for the first time the descendants of General Allard and Bannou Pan Dei. We were received by three delicious old ladies waiting for us under a planetree, as tall as the chenars in the Shalimar Bagh of Srinagar, in the garden of the "bastide" purchased by Bannou Pan Dei'  after the death of General Allard in Peshawar.

In Lahore we met Fakir Syed Aijazuddin, the learned and distinguished descendant of Fakir Nuruddin who was one of the closest friends of General Allard in Lahore. Since we had to go to India, Aijaz gave us the address of Professor Pritam Singh at Guru Nanak Dev University, Amritsar. Professor Pritam Singh's wonderful hospitality at the GND University Campus, quickly introduced us to the then senior historians of the Punjab : Dr. Ganda Singh, Professor J.S. Grewal, Professor F.S. Bajwa, Dr. Indu Banga, Mr. V.S. Suri, Professor and Mrs. B.N. Goswamy and so many other friends like Dr. H.S. Virk who started sharing with us their knowledge and their curiosity.

We wanted of course to meet H.H. the Maharaja of Kapurthala, the descendant of Sardar Jassa Singh and Raja Fateh Singh Ahluwalia. His grandfather, Maharaja Jagatjit Singh of Kapurthala, had been a great figure in France during the First World War and right after; in the twenties. Maharaja Jagatjit Singh's presence as the chief guest at the inauguration of the Monument de Neuve-Chapelle in 1927 was another landmark in the forgotten history of Franco-Punjabi relations. I shall always remember my first meeting with H.H. Brigadier Sukhjit Singh, MVC, at the railway station at Jalandhar, and his gracious hospitality at the Villa, and the fascinating exchanges we had on the past and present history of the Punjab.

In Lahore my colleagues and friends at the University (Professor Ebadat Brelvi and Professor Waheed Qureshi), at the Museum (Dr. S.R. Dar, Dr. Rahmani), at the Directorate of Archaeology (Dr. Walliullah Khan, Dr. Ahmad Nabi Khan, Dr. Mohammed Sharif and Mr. Nadiem) and in the Punjab Archives (Dr. N.A. Chaudhry) were extremely helpful in locating and identifying historical places. The small Franco-Pakistani community in Lahore - Tufail and Agnes Malik, Jahangir Malik, Fuad and Gisele Butt - saw my interest with ah encouraging eye. This interest was soon to receive my full attention and zeal.

There was definitely enough documentary evidence, both in public and in private archives, to start an academic research on the French in the Kingdom of Punjab. In 1975 Madame Colette Caillat, the renowned scholar on Jainism who had taught me Sanskrit in Lyons University and was then holding the prestigious.Chair of Sanskrit at the Sorbonne University, kindly accepted to guide me for a "Doctorat d'Etat" on the French Presence in the Sikh Kingdom of the Punjab. After ten years of research and three years of writing, the work was defended in Sorbonne in 1987, published by the Ecole Francaise d' Exteme-Orient in 1992 and was awarded the Prix Giles by the French Academy in 1995.

This research was about history and archives. But their main concern was also about living people and the future relations between France and the subcontinent. My young princess had generously agreed to marry me in Lahore, and soon our little son Jean-Francois was playing in Punjabi with Arvind on the GNDU Campus at Amritsar, in Urdu and French with Anjum and Bilqis in Lahore, in French with Frederic at Saint-Tropez. In 1979 Mrs. Turin-Allard and Mrs. Prevost-Allard, the great grand-daughters of General Allard and Bannu Pan Dei, came along with us to Pakistan. That was the first return of the Allard family to Punjab after 1839. They were warmly received in Lahore by Fakir Syed Aijazuddin. I then drove them up to Peshawar, Jamrud and the Khyber Pass where General Allard and the Fauj-i-Khas had guarded the entry point into the sub-continent from 1834 to 1839.

We then crossed the border at Wagha and went to Amritsar. It was not the same border which was agreed upon between the Maharaja and Metcalfe in 1809 and entrusted to General Allard and the Fauj-i-Khas in 1825. I remember the slide-lectures, I delivered in the Senate Hall of the GND University packed to capacity, with students seated on the stairs and on the floor. Professor J.S. Grewal was in the chair, and Mrs. Turin and Prevost Allard were the chief guests. Then Professor Pritam Singh accompanied the two ladies to the Golden Temple, where they were received with impressive dignity by the Head Priest of the Harmandir Sahib and given a saropa. It was Professor Pritam Singh who softly translated to them what the Head Priest said in Punjabi while putting the saropa over their head : "In memory of what your ancestor has done for the Punjab". We then drove to Chamba, the native place of their great grand-mother Bannu Pan Dei. There was an intense moment when they stood with a reverent silence in the Lakshmi Narain precinct in front of the temples of Shiva and Vishnu. We then met the royal family of Chamba, and we were particularly honoured by the presence of the eldest Rani, the mother of the late Maharaja.

I am thankful to Professor Prithipal Singh Kapur, Editor-in-Chief, Encyclopaedia of Sikhism at the Punjabi University, Patiala who very gladly undertook to edit the studies and also append an introduction. My special thanks are due to Dr. S.P. Singh, Vice-Chancellor, Guru Nanak Dev University, Amritsar for his Foreword and the keen interest that he has evinced in the publication of this work.

Since the preface of a book is supposed to concentrate in a few words or in a few names the main concerns of the author, I wish to dedicate this study to the youngest generations and to their own children whenever they come : to Jean-Francois, Olivier, Xavier, Roxane, Alexandre, Anjum, Bilqis, Frederic, Jean-Tropez, Arvind, Arsh Rup Singh, Momina, Mubarika, Kumail, Natacha.

And to Karen, my beautiful niece of Lahore. 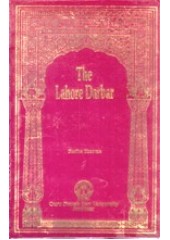 Foreword To The Book 'The Lahore Darbar' By Radha Sharma The grandeur and magnificence of the cou.. 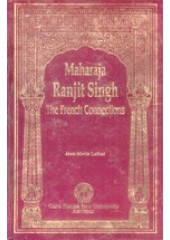 Foreword To The Book 'Maharaja Ranjit Singh - The French Connections' By Jean Marie Lafont Beyond..