I come form a devout Sikh family, and studied in a Sikh School, but my serious study of Sikh History, started only in 1990's.

The essays in this small book are an attempt to share with general readers and scholars,  my reading of some of the issues or problems in Sikh History, that had intrigued or intersted me - persumably many others also.

For example, it was difficult to accept an erroneous view, carried from one writer to others, that Guru Gobind Singh helped Prince Muazzam against his brother in their war of succession - the same Prince Muazzam , under whose governorship forces of lahore and Jammu, together with those of Sirhind had joined Hindu Rajahs to oust Guru Gobind Singh from his beloved Anandpur.

Maharaja Ranjit Singh was known to be a military genious, yet he treated his mother-in-law, Sada Kaur, so badly that she started hobnobing with the British, and was willing to pawn his state to them. It was his failure to see beyond his own life-span, that the British,  in whom he had invested his immense trust, and the Dogras, or whom he showered his stupendous favors, swallowed his empire, within a few years after his death - in comparison, the reigns of self-serving cis-Sutlej Rajahs lasted three times the period of his rule.

To understand these and many other incomprehensible events, it was essential for me to go back to  primary sources of the entire Sikh period.

Located in United States, devoid of such sources, it was essential for me to equip myself with a comprehensive library.

Apart from recent books, gazetteers and reprints of early works, I procured all available back issues of various scholarly journals, such as the Journal Of Sikh Studies of the Guru Nanak Dev University, Amritsar; Abstract of Sikh Studies of the institute of Sikh Studies, Chandigarh; the Punjab Past and Present of the Punjabi University, Patiala; and proceedings of previous Punjab History Conferences, held under the auspices of the Punjabi University. Books on Indian History, British History, Medieval History by various authors were essential to understand parallel events and trends. Collecction could not have been complete without Sikh, Hindu, Muslim, Christian and Buddhist scriptures and their translations.

Reading through these books, when a comprehensive data base, or a comprehensible chronology was developed, answers to several historical questions were shouting loudly at me. Connecting the dots, some of the pictures that emerged, I am sharing with my readers through the following pages.

Some of the Articles, herein, are loaded with quotes and references. Some readers might differ with my style of not paraphrasing reference material, for easier reading. But, in interest of authenticity, I have chosen to retain the originals. Not talking lines out of context, I have highlighted the points, which i wish to make editorially.

I would be looking forward to comments and suggestions from readers, to enrich my understanding of Sikh heritage.

About The Author Of 'Connecting The Dots In Sikh History'

Born in 1926, Sardar Harbans Singh Noor graduated from Punjab University. Lahore in 1943, to enter publishing and journalism career. He retired in 1984 after 26 years of service with the United Nations Information Service (USIS). New Delhi- 16 years as Editor ( Chief of Punjabi Press Unit) and last 10 years as a Cultural Affairs Specialist ( Chief of Programme Development and Research Unit - amini Think Tank). In the later capacity, he edited & produced a number of thematic portfolios and articles on international economic and political relations and American life and letters, for use by intellectuals participating in various seminars, organised by the USIS in different parts of India and other countries in North - He earned a special award for preparing a comprehensive book on Nuclear Non - Proliferation, which was distributed by the Agency in several countries of the world.

It is indeed gratifying to note that after retirement, he has decided to use his rich background in the service of the cause of Sikh history. While developing comprehensive chronology. Timelines of Sikh History ( 1469 to 1984 ), as a research tool, he has published several articles on the Internet.The present collection represents a very presentable sample of the rich treasure he has accumulated over the years. 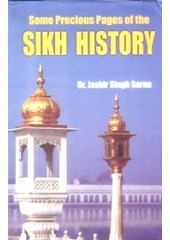 Preface To 'Some Precious Pages Of The Sikh History' By Dr Jasbir Singh Sarna The Sikhism is ..