Amritsar is world-famous by virtue of its being historically prominent centre of Sikh religious sovereignty.

As a gateway in commercial network with Pakistan, Iran and Afghanistan and with many of the European countries, the city is rated as one of the most worth-visiting places of the world.

Despite its strategic location on the Indo-pak border, the city maintains its Janus-faced demeanour towards promoting harmony and secularism in India as well as maintaining cordial relations with Pakistan.

The writings in this volume portray the ever-glorious chronicles that have remained a hallmark of the city since Guru-period in maintaining human-harmony, ever exhorting the national spirit, upkeeping its literary ambience and contributing towards overall Welfare of the people. With glittering traditions championed on the horizons of history by world famous dignitaries of the city, the information contained in the book stands testimony to its distinct secular character.

About The Author Of 'Amritsar - A City With Glorious Legacy'

Born on November 4, 1958, Varinder Singh Walia, presently Editor, Punjabi Tribune, Chandigarh began his life of letters in 1980 when he brought out Pulangh - a Punjabi monthly - and published his first book of short stories Khabarnama in 1983.

Appointed as Information Officer in Punjab Civil Secretariat in 1986, he worked as DPRO before he joined The Tribune Trust and worked at Amritsar where he penned note-worthy contributions in Amritsar Plus - a local pullout launched by The Tribune in 2004.

He has traveled extensively in India and abroad.

In 2007, he published his book of fiction Rukhan Di Dastan in Punjabi.

Amritsar city is one of the major cities of Punjab in India. History reveals that under instructions from Guru Amar Das, the third Master, to propagate Sikh Faith, this city was founded by Guru Ram Das, his successor, in 1574 A.D. on the land bought by him for 700 rupees from the owners of the village Tung. (Earlier Guru Ram Das had begun building Santokhsar Sarovar in 1564 A.D. - according to one source in 1570). When Guru Ram Das built his residence here and moved to this place, it was known as Guru Da Chakk. Later, it came to be known as Chakk Ram Das. Guru Ram Das began excavation of the sarovar, the holy tank, in 1574. It was ready by 1581. This tank was renovated by Guru Arjan Dev in 1586. Since then this city has been known as Amritsar - the pool of nector.The foundation-stone of the Holy Temple - Drabar Sahib - is said to have been laid by Sain Mian Mir, a Muslim devotee , at Guru Arjan Dev's behest. In 1590, Guru Arjan Dev moved to the nearby village Wadali where Guru Hargobind was born on June 19, 1595. By 1601, the Darbar Sahib was fully ready. In 1603-1604, the first volume of Guru Granth Sahib, the Sikh scripture, was completed and was installed at Darbar Sahib on August 16, 1604.

It is here that the Akal Takhat - the throne of immortality - the seat of Sikh temporal power , was built by Guru Hargobind in 1609. Two flags representing temporal and spiritual authority and Sikh sovereignty were put up in front of the Akal Takhat. Here Guru Hargobind wore two swords (kirpans) of Miri Piri - temporal and transcendental authority - at the time of his installation as the Sixth Guru.

On April 13, 1634, the Mughal army attacked Guru Hargobind Sahib here; the beginning of conflict between the religious royalty of the Gurus and the imperial authority of the rulers. The Guru had to confront the Mughal forces at different times and then moved to a hilly place Kiratpur near Ropar. Thereafter Guru Har Rai, the seventh Guru, also spent his time there. Guru Harkrishan was bestowed Guruship here, who moved to Delhi where he left for his heavenly abobe at a very tender age. From 1635 to 1698, Amritsar remained in the control of the Mina family; the descendants of Pirthi Chand - the elder brother of Guru Arjan Dev. During this period, on November 23, 1664, Guru Tegh Bahadur did visit the town but he was not allowed to stay here. In April 1698, Bhai Mani Singh was appointed as the caretaker of the shrines of Amritsar.

The Mughal chief of Patti tried to occupy Amritsar several times. One such attempt was made in April 1709. The Sikhs, under the command of Bhai Mani Singh and Bhai Tara Singh of Dall Wan, repulsed this attack. When Baba Banda Singh Bahadur occupied several areas in the Punjab, Bhai Mani Singh chose to leave Amritsar in order to avoid the Mughal attacks.

On December 30, 1711, the Mughal emperor Bahadur Shah granted Ajit Singh Palit the charge of Amritsar in order to use him against Baba Banda Singh Bahadur. After the death of Bahadur Shah, Ajit Singh Palit returned to Delhi. In 1721, Bhai Mani Singh returned to Amritsar and re-started regular worship. His first act was to solve a dispute between the Tat Khalsa and the Bandai Khalsa factions for the right to management of the shrines in Amritsar.

On March 29, 1733, a major gathering of Sikhs called the Sarbat Khalsa - a congregation, representing all Sikhs - was held at the Akal Takhat. It discussed the Mughal offer of Nawabhood which was refused. In April 1734, Bhai Mani Singh was arrested and was executed in Lahore on June 24, 1734.

In 1740, Massa Ranghar , a Mughal official, desecrated the Darbar Sahib. He was killed for this action by Bhai Sukha Singh and Bhai Mahtab Singh on August 11, 1740. In 1757 the Afghan army of Ahmed Shah Abdali demolished both the Darbar Sahib and the Akal Takhat. Baba Deep Singh led several thousand Sikhs were martyred. In 1762, the Darbar Sahib complex was demolished again by the Afghan army. On December 1, 1764, the Afghan army made another attack. Thirty Sikhs, led by Jathedar Gurbaksh Singh, fought against the mammoth Afghan army and were killed. In 1765, the Sikhs began re-construction of the shrine; its central part was ready by 1776.

Thus during the eighteenth century, Amritsar, like the Sikh community as a whole, witnessed many vicissitudes of history. It suffered repeated desecration and destruction until it was finally liberated after the establishment of sovereign authority of the Sikh misls and principalities in the Punjab in 1765. The town remained thereafter under the control of several misl chiefs, although its surroundings areas were held by Sardar Hari Singh of the Bhangi misl. Different Sradar or Chiefs constructed their own bungas or residential houses around the sarovar and also built up their respective Katras or property wards nearby, thus encouraging traders and craftsmen to reside there and over which the individual chiefs exercised their exclusive control. The sacred shrine was, however, administered by joint council comprising representatives of the chiefs who had made endowments in land for their maintenence. Even prior to the time of Sikh ascendancy, joint councils, known as Sarbat Khalsa, were there to take crucial decisions on political matters at Amritsar. Now again , with all misl chiefs having their bungas here, it became the common capital of the Khalsa. Devotees from far and near were free to visit the holy city almost after six decades of their severest persecution. And so did the businessmen and tradesmen got settled here to take advantage of the increasing pilgrims and resident population. Trade, commerce and crafts flourished on different katras, each having its own markets and manufactories. By the end of the eighteenth century, Amritsar had already become Punjab's major trading centre. Yet the town, with its multiple complexes set up, remained a confederation rather than a composite habitation until Maharaja Ranjit Singh (1780-1839) rose to power and consolidated the whole of the Punjab into one sovereign State.

Ranjit Singh, Chief of the Sukkarchak 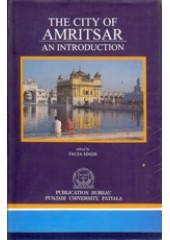